There are so many types of rifles, including Semi- Automatic Rifles, Bolt-Action Rifles, Lever-Action Rifles, Pump-Action Rifles and Single-Shot Rifles. So, what do these different terms mean and what are their pros and cons? Let’s get right to it!

Perhaps the most basic rifle is the single-shot rifle. As the name implies, it holds just one shot. Fire it, and it’s time to reload and then fire again. This begs an obvious question. Why buy a single-shot rifle when the overwhelming majority offer multi-round capacity?

Well, the single shot rifle offers more of a challenge. Thus, meeting that challenge has a certain intrinsic appeal. But single shot rifles also are generally exceptionally reliable by virtue of fewer moving parts. They are also easier to maintain and more affordable for the same reason. So, they can also be looked at as a good entry-level gun.

Pump action rifles (also known as slide-action rifles) use a movable forend. They’ve been around since the 1850s. At the end of each shot, you simply pull the forend back to eject the spent casing and then slide it back to its starting position to chamber another round. Then you’re ready to fire again.  Note: a small minority of pump-action guns reverse this. For those, you slide the forend forward to eject and then slide backward to chamber.

The nice thing is your support hand is already holding the forend. Thus, it’s easy to cycle quickly at the end of a shot. In comparison, with a bolt-action rifle, the support hand must be moved back to the bolt knob to cycle the action. The pump action guns cycle quickly, but in doing so, they tend to move the front of the rifle, which affects accuracy.

Most pump-action guns look like they have double-barrels. The bottom “barrel” is a magazine tube, and can hold, for instance, 14 .22 rounds. Capacity varies by the length of the magazine tube and the size of the ammunition. Obviously, more small ammunition can fit in a given length tube magazine than larger (longer) ammo. A downside of tube-magazine pump-action guns is that must be reloaded one round at a time once they are empty. You can’t just swap magazines. Or can you? Not all pump action rifles have tubes. Some use detachable box magazines like you’d expect in a bolt-action rifle. The advantage is faster reloads if you have extra magazines with you.

Pump-action guns are ambidextrous since there is no bolt to operate. Finally, many pump-action guns also allow you to load a single-round straight into the chamber (if it’s already empty, of course).

Since pump-action guns don’t necessarily produce a supremely high level of accuracy but do have very fast cycle times, they are well suited for use as shotguns. So not surprisingly, most pump-action guns are shotguns.

Newer lever-action guns (aka repeating rifles) have fetching Wild West American looks coupling retro styling with modern production and quality. But lever action guns were first developed in the 1820s and thus predate the classic Wild West. A highly notable early use was by the US Cavalry during the US Civil War.

The action is cycled by pulling an oval loop extension that’s located behind the trigger guard. These also use tube magazines that are directly underneath the barrel. Like pump-action guns, lever-action guns are ambidextrous since there is no bolt to operate.

When they were first developed, they were fearsome since they combined relatively high capacities and fast cycling that most previously common single-shot breach-loaded rifles just couldn’t touch.

Lever-action guns have a potential critical Achilles Heel. They can’t be fired from the prone position since there is no room to cycle their levers. Therefore, this can limit their use. It’s worth noting that not everyone agrees on this point!

On the other hand, for applications such as hunting, often people aren’t going to be prone anyway. And many of them find it’s more natural to cycle the gun using a lever-action than a bolt because you don’t have to reposition either hand. Lever actions use internal gearing to operate, and this can foul more easily than some of the other types described in this article.

As a rule of thumb, lever-action guns aren’t designed for the heaviest calibers. Thus, they have more limited ranges and a lower ability to take down the largest prey.

Bolt-action rifles offer an extraordinary latitude of options. They are available in all kinds of calibers, with different stock materials, stock profiles, and more.  Bolt-action guns are cycled (that is, a round is chambered into the magazine) but pulling the bolt arm up, pulling back the bolt (which ejects a round and chambers the next one), then pushing the bolt forward and rotating the bolt-knob back down. The bolts are typically on the gun’s right-hand side, and so this means pulling the bolt with one’s right hand and then firing with the left. Some guns, however, are set up for left handers and thus have the bolt on the left.

Firing a bolt-action gun has as a disadvantage that one has to reposition the firing hand to cycle the bolt and then reposition the same hand back by the trigger. Lever-action and pump-action guns don’t have this issue, and thus can cycle very rapidly. However, bolt-action guns can stay shouldered with one’s eye in place to quickly reacquire the target through the sights as the muzzle comes back down. This allows for tight shot groups.

Bolt-actions have been designed for seemingly every caliber from .177 (4.4 mm) air pellet guns all the way up to significantly larger ones that can take down any land creature. (In fact, in World War I, the Germans quickly developed the 13.2 mm (.52”) caliber Mauser 1918 T-Gewehr anti-tank rifle that could penetrate contemporary armor to wreak havoc on Allied tanks.)

A semi-automatic rifle uses detachable box magazines. It is much like a bolt-action rifle except it only uses the bolt to load (“chamber”) the first round so it can be fired. When firing the first round, some of the energy of the exhaust gasses is diverted to load the next round. Each pull of the trigger then continues this cycle until the magazine is empty.

Semi-automatic rifles have more parts and things that can go wrong than a bolt-action rifle. However, they have a higher rate of fire since each trigger pull fires and then loads the next round (as long as the magazine isn’t empty). Moreover, there’s less recoil since some of the exhaust gas that would normally produce the kick in a bolt-action is being utilized to load the next round. Since one can fire more rounds and since operating a semi-automatic doesn’t require moving the placement of one’s hands, it’s possible to get off a greater number of accurate rounds in a very short period of time.

On the other hand, the same reutilization of gases to load the next round means and the lower recoil also means there is less positive thrust propelling rounds, so the ultimate range of a semi-auto is less than a comparable bolt-action rifle.

There are two primary “looks” for semi-automatic rifles: classic and AR. The classic rifle superficially looks like a bolt-action rifle, and will typically have a wooden or synthetic stock. The AR “looks” like a submachinegun, but is considered different since an AR fires only one round per trigger pull while a submachinegun will fire non-stop until the trigger is released or it runs out of ammo. AR semi-automatics are highly modular and configurable, but that’s material for another article.

Of the Semi- Automatics, Bolt-Action, Lever-Action, Pump-Action and Single-Shot rifle categories listed in this article, Semi-Automatics are in some ways the apex. While expensive and not endowed with the same ultra-long distance as pure bolt-action rifles, they are well-rounded, versatile and in the hands of a regular shooter, the best at delivering stopping power quite accurately in a short period of time.

Keep in mind, we have plenty of other resources and products available at WesternGunShop.com, including information for new buyers and sellers. Stop by our site to learn more and find the right deal for you!

How to Purchase Your First Gun 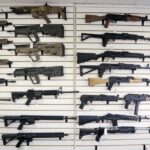